Review: My Heart and Other Black Holes by Jasmine Warga 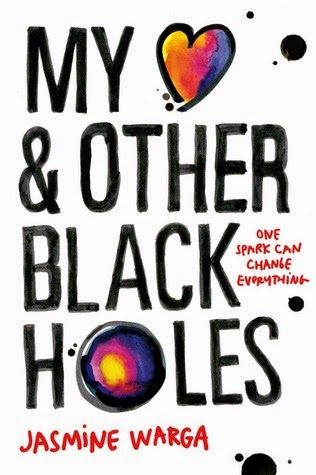 Synopsis from Goodreads:
Sixteen-year-old physics nerd Aysel is obsessed with plotting her own death. With a mother who can barely look at her without wincing, classmates who whisper behind her back, and a father whose violent crime rocked her small town, Aysel is ready to turn her potential energy into nothingness.There’s only one problem: she’s not sure she has the courage to do it alone. But once she discovers a website with a section called Suicide Partners, Aysel’s convinced she’s found her solution: a teen boy with the username FrozenRobot (aka Roman) who’s haunted by a family tragedy is looking for a partner. Even though Aysel and Roman have nothing in common, they slowly start to fill in each other’s broken lives. But as their suicide pact becomes more concrete, Aysel begins to question whether she really wants to go through with it. Ultimately, she must choose between wanting to die or trying to convince Roman to live so they can discover the potential of their energy together. Except that Roman may not be so easy to convince.

Review:
I have had issues with other books that were very similar to this one, so I was worried that this one would also be a disappointment to me. What I wasn't expecting was to fall in love with Aysel and Roman so completely. Flawed characters are my jam and these two are so flawed, yet so human, it was easy to fall in love with them.

I actually liked Roman a lot, maybe even more than I liked Aysel. Roman had his own guilt to deal with. He blames himself for the death of his younger sister, even though his parents don't blame him, and in fact they love him fiercely. I was angry with him that he wanted to commit suicide when he had two loving parents who had already been through the hell of losing their youngest. I understood his thought process, but I was still angry with him.

Now Aysel has her own demons. Her father committed an unspeakable act in their small town. Now he's locked away and she has pushed everyone away and no one will even look at her. Not even her own mother. I felt horrible for Aysel because what she really needed was a mom who could tell something wasn't right and who would reassure her that she was not like her father. Being like her father was Aysel's biggest fear, and I totally understood that feeling. I just wished she had someone to talk to about it.

They become suicide partners thanks to a website, and over the next few weeks they plan how they are going to do it. Where they will do it becomes most important because Roman has a specific, non-negotiable date in mind. April 7th is to be the day they do it.

But what neither of them expects is the thing that happens. They slowly begin to fall for each other as they spend more and more time together. He lets her in emotionally a lot sooner than she lets him in emotionally, but eventually, she too allows him in. This book that starts out feeling like "just another suicide book" turns into something beautiful and full of hope.

I wasn't expecting to have the feels at all in the book, but then they kinda came out of nowhere and before I knew it I was sobbing into my Kindle. This book was a beautiful book with interesting characters that I cared deeply about, and that was missing from the two previous "suicide books" that I had read.

This book surprised me in the best possible way and I think everyone needs to read this book. I didn't expect to love this book as much as I did, but I'm thrilled I read it and I want everyone else to read this gorgeous book. 5 stars to this book and I cannot wait to see what's next for this author.
Posted by Alexia Boesen at 8:00 AM