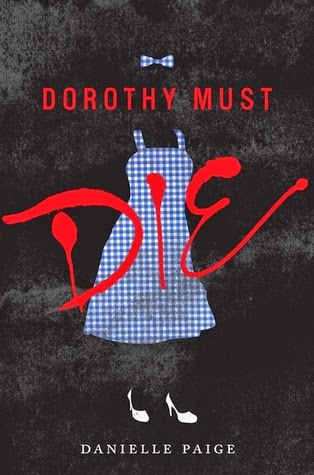 Synopsis from Goodreads:
I didn't ask for any of this. I didn't ask to be some kind of hero.But when your whole life gets swept up by a tornado—taking you with it—you have no choice but to go along, you know?Sure, I've read the books. I've seen the movies. I know the song about the rainbow and the happy little blue birds. But I never expected Oz to look like this. To be a place where Good Witches can't be trusted, Wicked Witches may just be the good guys, and winged monkeys can be executed for acts of rebellion. There's still the yellow brick road, though—but even that's crumbling.What happened? Dorothy.They say she found a way to come back to Oz. They say she seized power and the power went to her head. And now no one is safe.My name is Amy Gumm—and I'm the other girl from Kansas.I've been recruited by the Revolutionary Order of the Wicked.I've been trained to fight.And I have a mission.

Review:
I'm gonna let you all in on a little secret. I don't actually like The Wizard of Oz. I didn't like the books or the movie or anything that had to do with it. I'm like the only person I know who doesn't like the movie. Yes, I know it's considered a classic, but I never understood all the hype behind it. I'm sure you are now wondering why on EARTH would I want to read a retelling of a classic that I never liked.

Here's another secret, I like creepy things. I like tales that are much darker. So when I read the synopsis for this book, I got excited. Like really, embarrassingly excited. When my copy arrived at the library, I couldn't wait to tear into it.

Holy crap, if the original had been like this, I would have LOVED it. Because Dorothy Must Die was awesome, full of mystery and magic. It exceeded my expectations big time which thrills me because honestly I was a little worried that I wouldn't enjoy this one, but I knew very early on that, that wasn't going to be an issue.

From early on we're swept into a world that is familiar, but also unfamiliar at the same time. The Wicked are good and the Good are bad. Everything is sort of topsy-turvy in this world. The once bright and colorful world is now dark and gloomy. The world building throughout this book was top notch. At one point, I said that it was very Tim Burton-esque and I felt that way all throughout the book.

Dorothy is no longer the sweet girl that the story left off at. She's allowed herself to get wrapped up in power. She is now power hungry. Oz is no longer the happy place that it once was. Monkeys can get killed for treason. The Scarecrow is now a terrifying scientist who turns people into half human half metal. The Lion is terrifying in size and his thing is to drain the fear from his victims and the Tin Man who is just terrifying in his own right.

We also have Nox,who no one knows much about and we can't figure out whose side he's on. There's Gert, who I absolutely loved and wanted to hug her so many times. Melindra & Annabel who play small but important roles in the book. There's also Glamora and my personal favorite, Mombi. They're Good...or are they?

Amy! I actually really loved her as a character. I know some people didn't connect with her, but I did. She was everything that young Dorothy had been except for one small thing. She had edge. She wasn't the "good girl" that Dorothy was when she came to Oz.

Amy had her own demons. Her mom was a mess, her dad was living far away with his pregnant girlfriend and she was bullied constantly at school by a girl named Madison Pendleton.She didn't believe everything right away which I thought was very believable., but she also didn't take long to embrace what she needed to do.

I actually really loved the ending. I thought it was a great cliffhanger and given the characters that were involved, it definitely set the stage for an exciting, thrilling second book. I am totally giving this book 5 stars. It was perfect. It was awesome and I cannot wait to see what's in store for all the characters next.
Posted by Alexia Boesen at 8:00 AM