Review of None of the Above by I. W. Gregorio 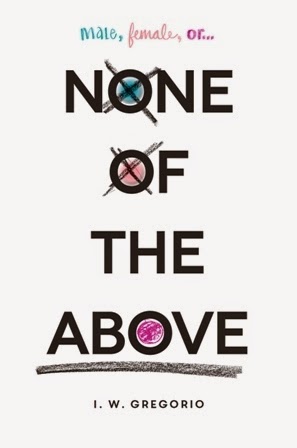 
Synopsis from Goodreads:
Middlesex meets Mean Girls in this one-of-a-kind YA debut.What if everything you knew about yourself changed in an instant? When Kristin Lattimer is voted homecoming queen, it seems like another piece of her ideal life has fallen into place. She’s a champion hurdler with a full scholarship to college and she’s madly in love with her boyfriend. In fact, she’s decided that she’s ready to take things to the next level with him.

But Kristin’s first time isn’t the perfect moment she’s planned—something is very wrong. A visit to the doctor reveals the truth: Kristin is intersex, which means that though she outwardly looks like a girl, she has male chromosomes, not to mention boy “parts.”


Dealing with her body is difficult enough, but when her diagnosis is leaked to the whole school, Kristin’s world completely unravels. With everything she thought she knew thrown into question, can she come to terms with her new self?


Incredibly compelling and sensitively told, None of the Above is a thought-provoking novel that explores what it means to be a boy, a girl, or something in between.

Disclaimer: I received this e-ARC from Balzer + Bray via Edelweiss in exchange for my honest opinion.

Review:
There is definitely a shortage of YA books that deal with this issue, and that really bums me out because I feel like this issue is more common than we know. For the people dealing with this condition, having more books on the subject would be awesome, and it would make these kids feel less alone.

From the beginning, we're introduced to Kristin who has friends, and a boyfriend she is madly in love with. They haven't taken the next step, but Kristin is realizing that she is ready for that next step. But nothing goes as planned that night, things are even more painful than she expected them to be. Going to the doctor- her first trip to the gynecologist is tough. She is being raised by a single dad, so that adds another layer of awkwardness to this whole thing.

One of the biggest questions for me at the beginning of the book was how did she not know? And that was answered in different ways, and it made sense to me why she would not know. I do wonder if it would have been found out sooner if her mother had still been alive. I'd like to think it would have been.

After she finds out the truth, she loses everything. Her friends & her boyfriend turn against her, they bully her, they taunt her. That was so heartbreaking, and I could feel Kristin's heart breaking as she lost every single high school friend that had liked her before this all came out. I was so angry at all these people for just abandoning her when she needed them most.

What I did love a lot, was her relationship with her father. We don't see much of that in YA, so I was excited to see it in this book. They loved and supported each other through Kristin's mom's cervical cancer diagnosis, illness and death. Now that Kristin was dealing with something scary, her father tackled it with the same fervent obsessiveness that he had brought to his late wife's illness. He was the one person that she knew she could count on.

I did enjoy this book, and it was written well, but I can't say I loved it. I'm not sure why I didn't love it, maybe it is the simple fact that, although I loved Kristin as a character I couldn't really relate to her. I do recommend this book, and I am going to give it 4 stars.
Posted by Alexia Boesen at 8:00 AM