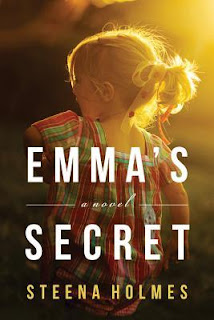 
Synopsis (from Goodreads):
For two years, Megan, Peter, and their two older daughters, Alexis and Hannah, dream of nothing but being reunited with the family’s youngest child, Emma, who was kidnapped just before her third birthday. When Emma is miraculously found living with an elderly couple just miles from the family’s home, they are hopeful that her return will heal the wounds her disappearance created.But Emma is vastly different from the sunny toddler they remember. She barely remembers her parents or her older sisters. She is quiet and withdrawn, and, worst of all, longs for the very people who kidnapped her.Megan is consumed with bitterness, while Peter works later and later nights in the company of his gorgeous business partner. And in the middle of everything, Megan’s best friend has become suddenly distant and secretive.Then a chance encounter in town leads to a secret that changes everything again for Emma. And Peter must decide between the happiness of his youngest daughter and the trust of his family.

Disclaimer: I received this e-book from Netgalley in exchange for my honest review.

Review:
Have you ever had that period of time where no book can hold your interest no matter how hard you try? Ever felt like you are forcing yourself to read something that you just aren't feeling right then? Well,that's what they call a "reading slump" Yup, no matter how much you want to read this book or that book,for some reason you just can't.

That's what's been going on with me the past week. I am even behind in writing & scheduling blogs because I haven't done much reading. So when I scrolled through my Kindle, I landed on this book. It had looked interesting but I hadn't read it yet.

Boy am I glad that I settled on this book. It was a great book with family as the center of it. Very few books that center around family weave other people into it well. First let me get this out. Megan drove me bananas. I understand the desire of keeping your child safe,especially since she had been away from you for 2 years. But I do think Megan took it to an unhealthy level. She wouldn't do girls nights with her friends,preferring to stay with Emma. Yes I understand the need to be near your child who had just been returned to you,but like I said, Megan went overboard.

I felt horrible for Alexis and Hannah. They wanted their mom's attention too but Megan was too busy catering to Emma's needs to even notice her older daughters. I cannot blame Peter for the way he reacted either. Megan was hell bent on hating anyone who had anything to do with Emma's disappearance. Megan's friend Laurie was far more patient than I would have ever been. It was clear to me that Megan blamed herself and she was going to bend over backwards to make sure Emma was always safe.

My heart ached for Emma though. She had spent 2 years with an elderly couple.She had bonded with them and suddenly she was thrust back into arms of parents she didn't really remember and sisters that she didn't remember. Her mom was pushing her to forget "Grandma and Papa" but Emma was clearly very attached to the older couple who had kidnapped her. Again I think Megan tried to rush things. I kept screaming at my Kindle for Megan to stop rushing Emma.

When kids are returned to their parents after a long absence such as being kidnapped,it's not going to instantly go back to the way it was before the absence. I think Peter had a much more realistic view of the situation. Megan had significant tunnel vision.

All in all this book was an enjoyable read. I laughed and cried throughout it. It was also a very quick read,which made me super happy. There were a few issues with the formatting,that bugged me and all but Megan were enjoyable characters that had strengths and weaknesses. I toyed with giving this book 3.5 stars because I don't think I'll re-read it again but the character development of Emma was wonderful to watch. So I'm giving it 4 stars.
Posted by Alexia Boesen at 8:00 AM