Review: The Treatment (The Program #2) by Suzanne Young 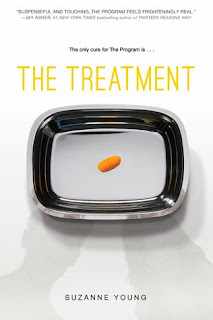 Disclaimer: I received this e-ARC from Edelweiss in exchange for my honest review.

Review:
How often is it that less than a week after you feature something in a WOW post, that you get access to an e-ARC of it? Well it happened to me. You may recall that I made The Treatment by Suzanne Young the featured book on my first WOW post. Imagine my joy and elation when I got the email from Edelweiss that my request was accepted.

You may remember that I loved the first book in this duology. My review of The Program is here. All I knew at the end of that book was that I needed more Sloane, James and yes, even Realm.

Well I got more of these three. I also got to meet some new characters. Dallas was a badass and I adored her to pieces.Cassanova "Cas" was a bit of a mystery throughout a lot of it. Then there was Kellan, Asa & Arthur and of course Evelyn. All of them played a part in how the book turned out.Even some returning characters such as Lacey, Kevin and Roger played a part in this sequel.

I'm going to do my absolute best to keep spoilers out of this review but oh my goodness, I loved this book. It was emotionally taxing, but not quite as much as the first book had been. I ugly cried quite a bit while reading this one. There were connections that no one saw coming. There was one connection that I totally called, but for the most part, the bombshells came without a single hint as to what was going to happen.

I still adored James and Sloane's relationship. At times Sloane was a bit co-dependent on James but those brief moments were just that, brief.They were stronger together than apart and I rooted for them all the way through. I cannot always say that with couples in YA books so James and Sloane were a welcome exception.

Sloane was an awesome character. She was stubborn, she was compassionate and she was loyal. I absolutely adored her. Probably even more than I adored her in the first book. James was awesome too. He seemed different somehow and I couldn't quite put my finger on how. He seemed more hopeful (the Program creators probably thought it was because of them) He was totally loyal to Sloane, despite a girl making the moves on him.

Realm turned out to have a lot more secrets than anyone could have dreamed! The vast chunk of the bombshells connected to him in some way.By the end, I was no longer sure if he was trustworthy.

I am going to give this book five stars.The editing was great, the feels were back in full force and the characters were awesome and multi-dimensional, which always makes me really happy. It was absolutely perfect and I loved it completely. I definitely plan on pre-ordering a copy of this book.
Posted by Alexia Boesen at 8:00 AM