Review: Above by Isla Morley 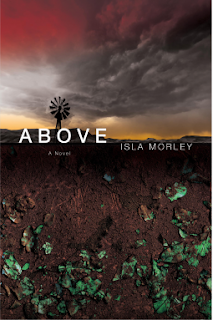 Synopsis from Goodreads:
In the bestselling vein of Room and The Lovely Bones, a stunning and harrowing novel about a Kansas teenager who is abducted and locked away in an abandoned missile silo by a survivalist who believes he is saving her from the impending destruction of the world.Blythe focuses on finding a way to escape until she discovers that she also has to deal with crushing loneliness, the terrifying madness of her captor, and the persistent temptation to give up. Nothing, however, prepares her for the burden of having to raising a child in confinement.Out of fear, she pushes aside the truth about a world her son may never see for a myth that just might give meaning to his life underground. But when fate intervenes, Blythe and her son manage to re-emerge, only to find themselves in a world even more terrifying than the one they left behind.Riveting and unforgettable, Above is a beautifully written and compelling tale of survival, resilience, and hope.

Disclaimer: I received this e-ARC from NetGalley in exchange for my honest review.

Review:
The concept was a really interesting one, and one that I do enjoy more often than not. However the execution was poor and it ended up being a book that I dreaded picking up. I hate saying that but it just let me down in a big way.

Dobbs works in the library that sixteen year old Blythe visits. When he appears in his truck driving along a dirt road alongside Blythe,she thinks nothing of it. Until she accepts his offer of a ride. From that moment on everything changes.

Soon she's being forced to shower and shave...every part of her body. Soon she's forced to lay with him intimately.Soon after that come children. Then years pass, some quickly, some agonizingly slow. Until one day she seizes an opportunity to get herself and her son out of there.

Things aren't the same as they were when she was taken into the silo many years ago. Where houses once sat, now there is empty and barren roads. There's suspicion surrounding her and her son and all Blythe wants is to find her family.

Dobbs was a creepy guy from the very beginning and that didn't surprise me at all. Men that do this stuff are often unattractive and creepy. That's why they abduct female teenagers. They hope that those girls understand their belief that they are trying to save them. Men like this also feel more attractive when they have a pretty young female under their grasp.

I tried my hardest to feel sympathy for Blythe but I just couldn't. It didn't make sense to me why she would accept his offer of a ride. He's a freaking stranger! I don't care how small the town was, Blythe still didn't know him. And his excuse that her brother was in an accident and he was supposed to fetch her? I call BS on that. That is an excuse that abductors use all the time.

Most of the book was a big fat bore-fest. The end of it got really far-fetched and I couldn't buy it at all. Too many characters were in the last 30% of it and I got confused and bored.The synopsis calls this book riveting and unforgettable? Um no, it was boring and predictable and for me, very easily forgettable. This book is getting 1.5 stars from me.
Posted by Alexia Boesen at 9:00 AM