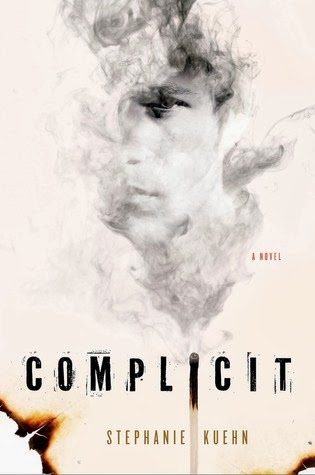 Synopsis from Goodreads:
Two years ago, fifteen-year-old Jamie Henry breathed a sigh of relief when a judge sentenced his older sister to juvenile detention for burning down their neighbor's fancy horse barn. The whole town did. Because Crazy Cate Henry used to be a nice girl. Until she did a lot of bad things. Like drinking. And stealing. And lying. Like playing weird mind games in the woods with other children. Like making sure she always got her way. Or else.But today Cate got out. And now she’s coming back for Jamie.Because more than anything, Cate Henry needs her little brother to know this one simple truth: she’s not the crazy one and never has been.He is.

Disclaimer: I received this e-galley from the publisher via NetGalley in exchange for my honest review.

Review:
By the time you read this I will have read and reviewed the first Stephanie Kuehn book Charm & Strange. I just knew the moment I read the blurb of this one, that I had to have it.The blurb sent chills up my spine. So when NetGalley approved me, I was super excited about it and I dove right in.I really wasn't sure what to expect, but what I got was 256 pages of pure awesome mind-fuckery.

Jamie has been dealt a rough hand. As a child he lived with his mother and big sister Cate. Until the day that his mother was shot and killed right in front of him & Cate. After that, they went into foster care until rich people Angie and Malcolm Henry adopted them. It's very hard for school-age kids to be adopted but this was a special case. Angie and Malcolm had recently lost their two children in a traffic accident.

At first Cate seems like she's the well adjusted one. But Jamie starts to hear stories. Stories about how his sister is making other kids do stuff.Stuff that they don't want to do. Of course Jamie is loyal to his sister, but then an incident changes that. An incident that shows that all those kids saying those strange things may not be so far off.

Then the fire happens and Cate is eventually charged with the crime. Finally, Jamie can breathe easier. "Crazy Cate" is in a juvenile detention center where she can't get to him. But nothing is the same anymore. He's an outcast, even his former best friend Scooter won't talk to him. After all it was Scooter's girlfriend who was horrifically burned in the fire that Cate set which also killed horses.

And then he meets Jenny. Sweet Jenny, kind Jenny. Jenny doesn't know about Cate because her family just moved here. So to her, Jamie is just a normal guy. When she finds out about Cate from the other kids at school, she doesn't shy away from Jamie.

Now Jamie is getting calls from his sister. He hasn't spoken to her in two years and now she's out and constantly hassling him over the phone.Jamie doesn't want to ruin what he's got going with Jenny but he's also trying to recover certain memories. Memories that only Cate would be able to relate to.

It isn't until he comes face to face with Cate for the first time in 2 years, that he starts realizing things. Memories that had been long repressed creep back into the forefront of his brain. Suddenly, everything he thought was true is being called into question.

Malcolm & Angie played pretty minor parts. Angie was in it more than Malcolm was. They were okay people. Angie was a good mom to the kids and when Malcolm was around he was good to both Cate &
Jamie. They definitely grieved for their birth children, Madison & Graham. Even going as far as encouraging Cate & Jamie into doing the kinds of things that Madison and Graham enjoyed. Such as horseback riding & playing the piano.

I think they tried to protect Jamie in the end. They had already lost their biological children and their adopted daughter was lost to her troubles. So they focused on keeping Jamie safe and happy. Even going as far as to baby him a bit. Especially when it came to the nerve damage to his hands.His hands had started giving him problems the night of the fire. Now whenever he was stressed out, the issues flared up again.

I just cannot believe what a ride this was. And the mind-fuckery? Totally crazy and this book messed with my mind in the best possible way. Oh man this book was fantastic.It was a total page turner because you never quite knew what was going to happen next and it was oftentimes, totally unexpected.

Thrillers are harder to review because there's often no true feels in the books. There's craziness and mind-blowing and all sorts of other things, but no true feels. With that said, this book will be getting the full 5 stars. It was totally awesome and Stephanie Kuehn has become another one of those auto-buy authors. Which means, I'll buy anything this woman writes. I definitely plan on ordering a finished copy of this book.
Posted by Alexia Boesen at 8:00 AM