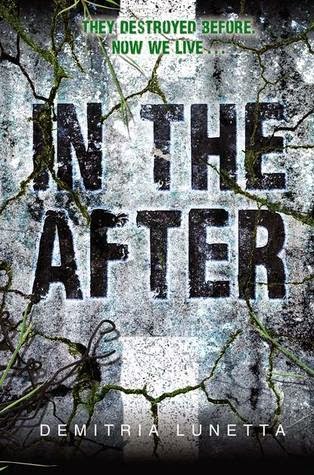 Synopsis from Goodreads:
They hear the most silent of footsteps.They are faster than anything you've ever seen.And They won't stop chasing you...until you are dead.Amy is watching TV when it happens, when the world is attacked by Them. These vile creatures are rapidly devouring mankind. Most of the population is overtaken, but Amy manages to escape—and even rescue “Baby,” a toddler left behind in the chaos. Marooned in Amy’s house, the girls do everything they can to survive—and avoid Them at all costs.After years of hiding, they are miraculously rescued and taken to New Hope, a colony of survivors living in a former government research compound. While at first the colony seems like a dream with plenty of food, safety, and shelter, New Hope slowly reveals that it is far from ideal. And Amy soon realizes that unless things change, she’ll lose Baby—and much more.Rebellious, courageous, and tender, this unforgettable duo will have you on the edge of your seat as you tear through the pulse-pounding narrow escapes and horrifying twists of fate in this thrilling debut from author Demitria Lunetta.

Disclaimer: This was a personal purchase.

Review:
This book was mindblowingly epic. Oh my goodness, it was fantastic, fabulous and all other positive words you could think of. I am so very picky about my Sci Fi, but this one blew me away completely.

Amy and Baby were a dynamic duo, one that was quite unique to me. They were essentially sisters by circumstance and they looked out for each other, they protected each other. Despite her age, Baby seemed to be quite mature and resourceful for her age. I think that was due to circumstance as well. She was mute, never spoke a word as long as Amy had known her. A mute toddler adds another layer to this fantastic book.

Amy and Baby live in silence, communicating only through modified sign language, which again, was awesome. They think they're the only ones still alive...but they're not...

When they are rescued by New Hope, everything seems like it's a dream. There's enough food, water and all other supplies necessary and they learn that they aren't alone and that other survivors exist. But things at New Hope aren't what they seem and Amy begins to realize that she can't be there and that the safety is a facade. She is scared for Baby though as Baby has secrets that only she knows and if anyone finds out, Baby will be in grave danger.

I really liked that it focused so much on the science fiction stuff and there was only a small sprinkling of romance. I think that made the book much stronger. The book didn't drag at all which is one thing I really loved. Often, when a book is over 400 pages, there are lulls in it, but not with this one. It was action packed throughout the entire thing. If you like science fiction, I think you'll like this book a LOT. I am giving it 5 stars and I am excited to dive into the conclusion of the duology.
Posted by Alexia Boesen at 8:00 AM