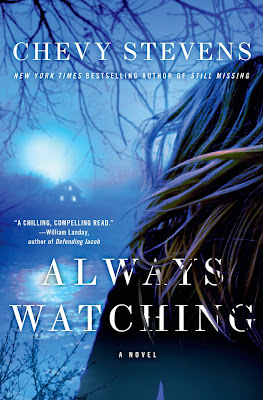 Synopsis: When a new patient by the name of Heather Simeon arrives at the hospital,psychiatrist Dr. Nadine Lavoie senses something about her but she has no idea how similar their lives are until Heather begins to open up bit by bit.Dealing with a runaway daughter by the name of Lisa,Nadine must confront the memories of her horrific childhood.She begins to remember with more clarity the horror that she,her mom & brother experienced when they went to a compound on Vancouver Island. Now Nadine must find out what really happened and why the name Aaron Quinn still scares her.

Disclaimer: I received this book in exchange for an honest review.

Review: I wasn't expecting to get this book. In fact this was the first unsolicited book that I have received. Nonetheless I was in between books and this one came at the right time. As soon as I read the synopsis of the book, I knew that I had to read this.It's been a long time since I have read a book that kept me up half the night and made it difficult for me to put down in order to sleep.I managed to finish this book in under 24 hours and a 6 hour sleep.

I really liked Nadine.She was compassionate towards her patients without becoming too involved in their personal lives.She was personable and likable. I had a feeling I knew what she was going to find out about her time on the compound but I was so hoping I was wrong. I wish we had gotten to see more of Nadine's brother.I found him to be very compelling. I never quite believed that he knew nothing about what Nadine had gone through at the compound.

My heart ached for Heather.She seemed so damaged. I don't think she was like that before she had spiraled downward. Daniel adored her but I knew pretty quickly that there was more to him than met the eye initially. I knew he was somehow tied to the mysterious Aaron Quinn.I also knew that if there was a connection,we wouldn't discover it until the book was almost over.

Lisa was such a troubled young woman and I knew that could pose a problem for her as the compound leaders seemed to be very adept at convincing the troubled people to join them.I found myself hoping against all hope that Lisa would escape her demons as unscathed as possible. I had a feeling I knew what had driven Lisa into drugs but again I was hoping I was wrong

Books about these religious cults that begin in a compound have always been interesting to me. Even though I am not of the religious sort,I find the complete trust in a leader compelling.This book held many secrets in it and every chapter would unveil yet another layer of secrets. Some were compound related,some weren't.

This book gets 5 stars.It was a thrilling read that made me feel so many things. By the end of the book I was full on crying.I had gone through so many emotions while reading this book. Of course this book isn't for everyone,but it was right up my alley. I plan on buying the previous books that this author has written and all future books that she writes.
Posted by Alexia Boesen at 8:00 AM