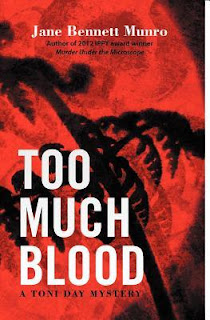 Synopsis: Pathologist Toni Day receives a call in the middle of the night informing her that a local attorney by the name of Jay Braithwaite Burke has been found dead in his Mercedes. This attorney was known because of his elaborate hedge fund that he had managed to get the entire hospital to invest in. The only ones who didn't invest were Toni and her husband Hal.Jay disappeared shortly after it was discovered that his hedge fund was actually a Ponzi scheme.

When Toni discovers that Jay bled to death,she's ready to rule this as a homicide.Before she can do that,his partner Lance dies in similar circumstances. This is quickly followed by a series of house fires that leave both Jay & Lance's wives and children homeless.

Toni is already dealing with some personal issues of her own.Her marriage is on the rocks. She fears that the emotional distance that she is experiencing with her husband could lead him to an affair. Her suspicions only grow when she sees him with a young,blond twenty-something woman.

However,concerns about her husband's faithfulness must be put aside as a mysterious illness begins to threaten the lives of those she knows and loves. Can she solve the mystery in time?

Review: Despite seeing that this book had some not so great reviews, I was elated when I got a copy from the author and the following day I dove head first into the book.Mystery books have always been a favorite of mine so I had high expectations for this book.

My expectations were definitely met.This book was an awesome book. Yes there were some issues mainly surrounding the HIPPA laws that I know are in place to protect the patient. As someone who has spent a ton of time in hospitals,I was expecting to be bothered by the violations of HIPPA but I found myself not even caring. That's how engaging I found the book.

This book kept me guessing the entire time. I really liked Toni and she seemed to have everything all put together even though her personal life was unraveling. I wish I had a better feeling about Hal but I don't feel like his character was developed as much as I was hoping.Then there was Bambi who I didn't like initially but I grew to absolutely adore her. Let's not forget the awesomeness that was Toni's mother,Fiona. She was full of spunk that was so similar to Toni.

The finale scene with Ruthie and Toni was pure perfection. My heart was racing as I read the pages.It was so suspenseful that I could barely wait to read the next page and the next one.

I would give this book 4 stars. The only reason it's not getting a full five stars is that I don't feel like I got to know all of the supporting characters as well as I wanted to. I think she could have tapped into them a bit more,especially Hal.
Posted by Alexia Boesen at 8:00 AM