Review: If You Stay by Courtney Cole

I was urged to read this book by a very good friend of mine several months ago but really didn't have the means to buy it until recently.I had been losing faith with some books and I figured that now was just as good a time as any to read this book. 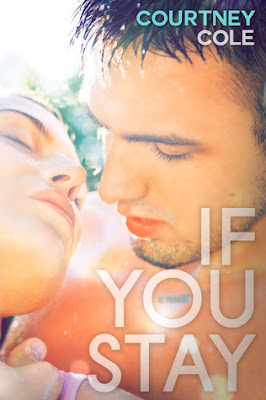 I wasn't sure what to expect when I first started this book. All I knew is that one of my very best friends had loved this book. So when it opens with a scene straight out of a really bad porn film I was super confused but almost instantly I was hooked. Pax Tate is one screwed up individual but I could tell that it was a facade almost immediately however I wasn't sure exactly what he was hiding until many chapters later. Mila Hill had her own share of lousy experiences and yet she handles things so much differently than Pax does.

Pax's way of handling things revolves around booze,cocaine & sex.Lots and lots of it. It's not until later when we discover why exactly the sex act of a blow job becomes so important.The reasoning is wrapped around a mailman,Pax's deceased mother and other unspeakable things.

Mila has her sister Madison and the Italian restaurant called The Hill that once belonged to her parents before their death. Mila also is an artist and she finds comfort in that.

The question eventually comes: Will Pax ever be able to stop the nightmares and remember the circumstances surrounding his mother's death and will Mila be there to comfort him when he does discover the horrifying truth?

I would easily give this book 5 stars as it had a little bit of everything. Sex,mystery & romance.
Posted by Alexia Boesen at 4:16 PM