Review: Not For Profit by Glenn Shepard MD 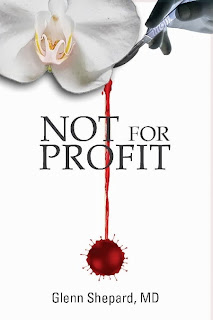 Synopsis from Goodreads:
A prominent surgeon accused of murder and terrorism . . .
A corrupt healthcare administrator hell-bent on bloody revenge . . . A mysterious seductress whose secrets could free the doctor and kill thousands . . . A terrorist cell with missiles aimed at a leading hospital in America’s Bible Belt . . . NOT FOR PROFIT takes you on an action-packed thrill ride that will have you questioning suspects, motives, and outcomes until the very last page. Renowned plastic surgeon Dr. Scott James is charged with murder after two bodies are found at his surgery center. Just weeks before the start of his capital murder trial, Dr. James is approached by a beautiful woman claiming she can help him gain information that would prove his innocence. As James hunts down the evidence that might free him, he faces a barrage of threats to his life and liberty—and makes one chilling discovery after another: Corporate corruption. A conspiracy to frame him for murder and for terrorist acts. A secret drone-control operation that takes out targets in Afghanistan and Pakistan. The true identity and intent of his beautiful ally. And a plot to blow up the local hospital and surrounding community.

Disclaimer: I received this book from the author in exchange for my honest review.

Review:
I was truly hopeful that this book would live up to the synopsis that that author emailed me awhile back. But it didn't. It failed horrifically and the only reason I even finished the book was that I felt obligated to since the author had so kindly sent me a copy.

I don't know what was worse, the botany lesson at the beginning of every chapter or the vivid descriptions of ritualistic rape and murder throughout this book.Or even the horrifically one dimensional characters. The dialogue was simplistic and not very interesting at all. None of the characters were likable which is a really big deal to me. If they are likable,then sometimes that can save a book. Not this book and not these characters.

It was all just too much for me. I'm giving it one star for the sole reason that I managed to finish this book. There were many times that I just wanted to throw it far away from my body and never look at it again. Yes it was that horrible.Maybe someone else will really enjoy this book. It just wasn't for me.