Review: Over The Rainbow by Brian Rowe 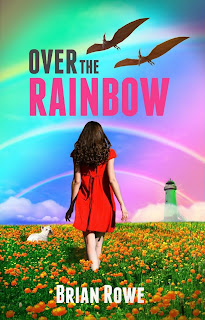 Synopsis:
A modern re-imagining of The Wizard of Oz!Zippy Green never meant to fall in love with a girl, but when she does, her ultra-conservative father tries to send her to anti-gay camp. At the Kansas City airport, however, she hides inside a giant suitcase and sneaks onto an airplane headed not to the camp, but to Seattle, where her online love Mira lives. Halfway through the flight, the plane barrels out of control and crashes into the ground, knocking her unconscious. When Zippy awakens, she finds that most of the passengers have vanished. She doesn’t know what’s happened, but she’s determined to find out. She begins a quest on foot toward Seattle, and along the way, she meets a teenager with a concussion, a homeless man with a heart condition, a child without a shred of bravery, and a terrier named Judy. Together the group discovers that more than two-thirds of the world's population have mysteriously disappeared. But that's only the beginning...All Zippy wants is to find her Mira, but before she can she has to contend with two outside forces. The first is her homophobic father, who does everything in his power to keep her from the girl she loves. And the second is extinct creatures of all shapes and sizes, including living, breathing dinosaurs, which have replaced the missing population.

Disclaimer: I received this e-galley from Netgalley in exchange for my honest review.

Review:
Okay first of all let me admit that The Wizard of Oz is definitely not my all time favorite movie. In fact I don't like it. At all.Even as a nearly 28 year old woman, I don't like it. However I was curious about the modern retelling of it so I decided to give it a shot.

With the exception of Zippy's conservative anti-gay father, I loved the rest of the characters. Zippy was absolutely adorable and Frankie, Mr. Balm and Ellie were awesome too.Frankie's father was the complete opposite of Zippy's father which was so awesome.When we first meet Mr. Balm he gives off this really creepy old homeless guy vibe. Thankfully we realize that he's quite normal and not creepy at all.

I get very angry every time someone in a book goes on a homophobic rant, tangent, whatever you want to call it. I absolutely hated every word that came out of Zippy's dad's mouth. It was clear to me that he didn't care about Zippy's happiness. He only cared about his career and how it would look to have a lesbian daughter. However, watching him evolve throughout the book was awesome to watch. It was something I never expected to see, but I did and it made me happy.

I don't like Jurassic Park either, but it was really cool to have dinosaurs and other extinct species emerge from the shadows in this book. It was fascinating and I loved seeing how excited Zippy got,especially with the dinosaurs.

Oh I almost forgot about Judy, the white dog that was also on the plane with Zippy and Frankie in the beginning.She was clearly supposed to be Toto if we are comparing this modern day version to the original version.

I love that there are getting to be more LGBT characters in YA. That shows a lot of progression if we compare the books out now to the books that were out even five years ago. So I am giving this book 4 stars. I found it completely enjoyable and the characters were likable, with the notable exception of Zippy's father.

"You can't prevent someone from being gay. They just are." -Frankie
Posted by Alexia Boesen at 8:00 AM