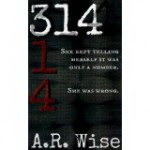 Synopsis: Alma Harper has done her best to forget all about what happened in Widowsfield 16 years ago. She has a great career that she loves and is rekindling things with her one true love.Ye the number 314 haunts her as does the day her brother disappeared.When a reporter appears in Alma's life just days before March 14th,Alma realizes that for her own sanity she must find out what happened that day,sixteen years earlier.

Disclaimer: I got this book as a freebie off of Amazon.com.

Review: I wasn't sure exactly what I was getting into when I got this book as a freebie off of Amazon. I needed a scary book and boy did this book deliver in a big way. The beginning was definitely creepy and disturbing and if I had a weaker stomach I probably would have abandoned the book.This was definitely not a book for everyone due to it's dark subject matter. Nor do you need professional help if you enjoyed this book.

The hops from sixteen years ago to present day were a little difficult to adjust to but once I did adjust to them I had no issues. Editing was great. I found no issues in either grammar,spelling or formatting which really made me a happy camper.Editing is a big issue for me so to see a flawless editing job in this book was a great feeling. Pacing-wise the story was good too. There was one point,about 3/4's of the way in,where there was a little lull but thankfully it didn't last long.

Paul was so awesome throughout the book. You knew that he loved Alma.It was plain as day.Especially when he agreed to join Alma on a quest for the truth.Yes he had kind of a douche-y history but it was clear that it was always Alma.Thankfully the romance/mushy stuff took a backseat to the creepier stuff.

Eeeek, I loved Jacker. He was another awesome character who turned out to be so much more complex than anyone could have imagined.Rachel and Stephen were awesome too,even if Stephen was a tad bit overzealous about the whole Widowsfield thing.I actually felt sympathy for Rachel because Stephen seemed SO obsessed with it.Now I wanted to like Aubrey,I really did but she came in so late in the book that it was hard for me to really care too much about her.

I didn't even realize this was book 1 of a series until I reached the end. GAH! I was so aggravated about that.However I still plan on reading book two. Now that I look back on this book it does seem like the entire thing was the beginning of a series.There was a LOT of character development which I loved.This book is getting 4.5 stars from me. It was practically perfect except for that small lull that I mentioned earlier and the addition of Aubrey who I think was brought in too late in the book.