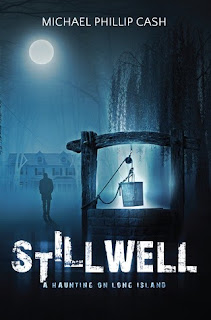 Synopsis: Paul Russo's wife, Allison just died after a brutal & thankfully quick battle with brain cancer. She leaves behind,not only her husband,but the couple's 3 children Veronica,Jesse & Stella Luna.While Paul is trying to get their life back in order,he is being tormented by a demon who appears to be holding his wife's spirit hostage. Throw in attempts to sell an old mansion which leaves behind it's own dark demons.Paul must reach back many years of family history in order to set his wife's spirit free.

Disclaimer: I received a copy of this book in exchange for an honest review.

Review: Normally I really like these types of books. They are creepy and they make me huddle deep into my blankets or whatever else I have around me. Unfortunately this one was not like that.It was boring & predictable.I was really hoping for a scary read,but this was not scary.

The kids were cute but I didn't think that they developed the kids personalities enough.I know that grief manifests itself in strange ways but I really didn't feel a connection between Paul and his two older children. I sensed that Stella Luna was Paul's favorite and that drove me batty.

Molly was bubbly and I think she along with Georgia were the best part of the book.The reading that Paul had done by Georgia reminded me too much of an episode of Long Island Medium. I love that show but having something so similar in the book really bugged me.

Melissa and Craig added nothing to the story. They added a link to the house but that's all.I think the author could have managed to do that with two more likeable characters.

I think another issue is the fact that it was so short and it felt like the whole thing was rushed. Supernatural stuff like this need to be explained better and it didn't feel like the author totally committed to the subject matter.

The editing,gah most of it was great. However there were a few passages were it was clear that someone was speaking but yet there were no quotation marks. That in itself drove me CRAZY!

I didn't hate the book but I didn't love it either. Some parts were great but some parts were just downright terrible. That's why I have to give it 3 stars.It didn't have the creepy factor that I was looking for.

Maybe this one will appeal to one of my  readers.