Hello everyone, nope no review today but after reading Molli's post about her furbabies as well as Kara and Lynn's post on their rescue animals, I decided to take some time to talk about my own furbabies. First of all,I want to introduce you to a very special cat who is no longer with us. 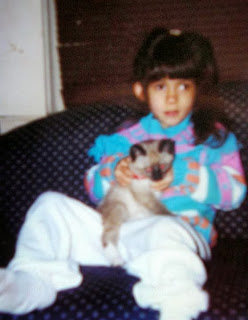 Here I am at five years old with a teeny tiny kitten that I named Molly. She was a present given to me by my grandmother's 2nd husband who was more like a grandfather to me than my actual grandfather. I had just had serious, life-saving surgery and he got me this kitten as a present while I recovered.We lost her to Lymphoma shortly before my 18th birthday. Nine years later, I still miss her.

I have had cats in my home pretty much all of my life. I remember some of their names and what they looked like.


Those are all the cats who have crossed over to the rainbow bridge in my life. They all meant something to me. But enough sadness. Let's meet the 2 newest additions to my life. Prince and Tiffany. 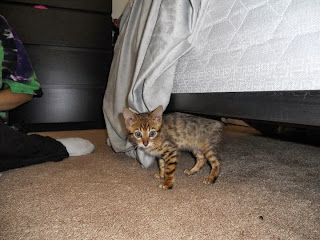 Here he is on the very day we got him. Now the circumstances are definitely not ideal but I am so grateful we were able to give him a home. First of all the lady we got him from assured us up and down that she was a rescuer and that she just wanted to find a good home for him. She assured us that he was in perfect health and that he was 11 weeks old.

Yeah...No. However we were worried about what she'd do to him if we didn't take him and so we did.We made an immediate appointment with the vet and was told that not only was he not 11 weeks old, the vet estimated he was 8 weeks old. The vet tech we had that day said he looked more like six weeks old. Then we were told he had yeast in his ears along with ear mites, worms in his stomach and worst of all,he tested weak positive for Feline Lukemia.
I was heartbroken.He was such a sweet baby and I hated the idea of him suffering.We decided to nurse him back to health and then retest him. When we retested him he still was showing a weak positive. The vet then said, we'd test him a 3rd time and if that test was also positive we'd treat him as if he had Feline Lukemia. Well as luck would have it,January 6th, 2012 we got the third and final test results back...

That was the best news we had ever heard.I just remember crying and cuddling him pretty much the entire day.Plans were then made to neuter him.He did wonderfully with that surgery and it really mellowed him out.Before then he would attack us for no reason...a lot.He still did it after he was fixed but it was no where near at the level it used to be.

Oh and one day I was sifting through the stuff that the lady we bought him from, gave us and I found a blue TICA slip which told me that she was not a "Bengal rescuer" but a backyard breeder as she had known EXACTLY who Prince's parents were. 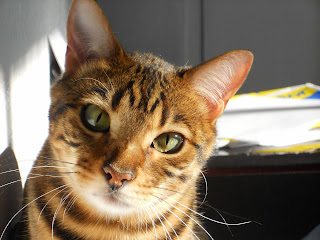 Right around Christmas of 2012, we started talking about getting another cat.We had gotten the approval from the landlord so we began looking.This time we went through a reputable breeder.I had lost the fight with my mom to get a shelter cat.Shortly after a cardiac procedure I had in February, we found the kitten we wanted. 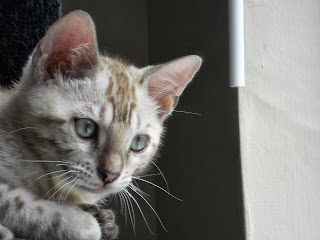 When she came to live with us, she was pretty shy initially and she still is shy with those she doesn't know really well. She is such a sweetheart and really the complete opposite of Prince.She is so healthy which is a great thing. She has bonded with me as I was the main person who was with her when she first came to live with us.

Yet she and Prince get along great. I was worried about how Prince would do with a new cat as he is pretty protective of the three of us who live in this house. 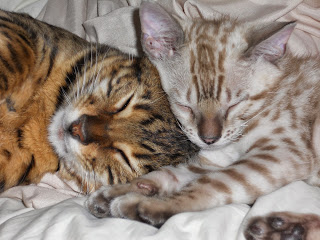 Clearly I didn't need to worry. They get along just fine.

The naming of the cats was tough, both times. We picked names out of a hat for both cats. Prince was named after the musician and Tiffany was named after Jennifer Lawrence's character in Silver Linings Playbook.

So tell me about your pets!