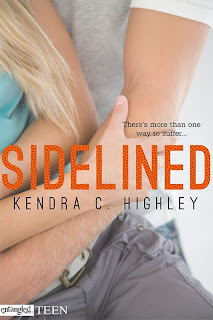 
Synopsis:
After being pushed to excel her entire life, high school basketball star Genna Pierce is finally where she wants to be. University scouts are taking notice, her team is on its way to the state tourney, and Jake Butler, the hot boy she's daydreamed about since ninth grade, is showing some definite interest. When he asks her out and their relationship takes off, Genna believes things can't get better.Then, it's over.A freak accident ends her career before it's even begun. Her parents are fighting more than ever, her friends don't understand what she's going through, and she's not sure who she is without basketball. And while he tries to be there for her, Genna doesn't understand how Jake could ever want the broken version of the girl he fell for.Her life in a tailspin, Genna turns to the only solace that eases her pain: Vicodin.

Disclaimer: I received this book from Netgalley in exchange for my honest review.

Review:
This one is going to be hard to review. Not because I didn't like it,because I did actually like it,but because I didn't connect with Genna as much as I wanted to. I had never been the star of anything only to have it ripped away from me. I had never had a mother who was more interested in me as an athlete than as an actual person. Unlike Genna, my mom and I are unbelievably close and we have been, ever since I was a little girl.

I couldn't get into her relationship with Jake either. He seemed like such a sweet guy and he clearly liked Genna a lot. But I couldn't get excited about the high school sports relationship. Jake seemed too "vanilla" and that has always bored me. I don't want a guy to be super edgy, but just having a little edge to a guy would have been better.

The book really picked up after Genna's accident and this was when I really started to like it. The subject of medication missuse is not something that is a hot topic in YA books so I was excited to see how the author handled it. I was very impressed with how the author handled it. From Genna's denial about her problem, to her lies about it just so she could score more pills from anyone who would give them to her.

I loved how her friends stuck by her even when they knew what had happened. Even her parents worked to help her get some help for this issue. They didn't let her deal with this problem alone. In so many YA books, parents are pretty much non-existent, I loved that about this book. Her parents were there in some facet the entire book.

Now let's get down to the main reason that I had some issues with the book. The editing was atrocious. The words would be smashed together in some sentences or spread out in sentences. The biggest problem I found was that only the first few letters in a word would appear and I'd have to guess at the word. I read books to enjoy myself and it's very frustrating when I have to play "guess the word" every other sentence.

(I spoke to Heather at Entangled Teen regarding this editing issue and she told me that Netgalley's conversion of the file, completely corrupted the files and that this issue had been going on for awhile.)

However, the book itself was different and interesting. It was not like anything I had ever seen or read before. It was raw and gritty and heartbreaking. So despite the editing issues and not connecting with Genna very well, I'll be giving this book 4 stars.
Posted by Alexia Boesen at 8:00 AM