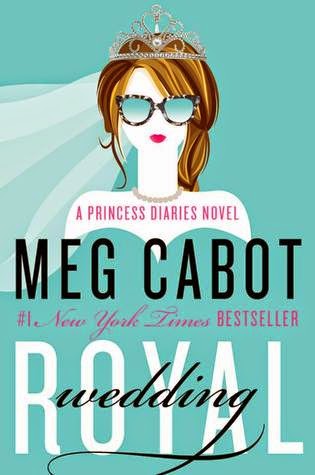 
Synopsis from Goodreads:
From the #1 New York Times bestselling author of the Princess Diaries series, comes the very first adult installment, which follows Princess Mia and her Prince Charming as they plan their fairy tale wedding--but a few poisoned apples could turn this happily-ever-after into a royal nightmare.For Princess Mia, the past five years since college graduation have been a whirlwind of activity, what with living in New York City, running her new teen community center, being madly in love, and attending royal engagements. And speaking of engagements. Mia's gorgeous longtime boyfriend Michael managed to clear both their schedules just long enough for an exotic (and very private) Caribbean island interlude where he popped the question! Of course Mia didn't need to consult her diary to know that her answer was a royal oui.But now Mia has a scandal of majestic proportions to contend with: Her grandmother's leaked "fake" wedding plans to the press that could cause even normally calm Michael to become a runaway groom. Worse, a scheming politico is trying to force Mia's father from the throne, all because of a royal secret that could leave Genovia without a monarch. Can Mia prove to everyone--especially herself--that she's not only ready to wed, but ready to rule as well?

Disclaimer: I received this e-ARC from William Morrow & Company in exchange for my honest review.


Review:
Boy was this a major blast from the past. I was so excited to see this book on Edelweiss and I immediately requested it and crossed my fingers. Of course I was thrilled to be approved for it, and instead of waiting until April to read it, I tore into it as soon as I finished a book.

I didn't realize how much I had missed these characters until I started reading, and it didn't take me long to remember why I had loved these books as a child. Cabot continues to tell Mia's story, although now there are "grown up" themes in the story. Other than marriage and her simply being a princess, there are references to sex, alcohol and other adult themes, so if you are expecting this book to still be be cute, awkward, and even naive Mia, you will be sorely disappointed. She still is cute, awkward Mia, but she's also an adult now.

Ahhhh, Michael, I still love you. Michael is still very grounded despite having a princess as a girlfriend. They've been going out for so long, I was worried that things between them would feel stale and old. Nope! They are just as cute and adorable as ever. He's supportive of her, and all she has to do, and she supports him in his endeavors. They really do have a perfect relationship. Well as perfect as it can be when they are frequently surrounded by bodyguards.

I had really missed Lily too. She had reminded me so much of myself all those years ago. She still reminded me of myself even though she had taken the path that I had walked away from. I loved how she was still Mia's best friend. Sometimes things can get a little murky when a woman is dating the brother of her best friend. Not with Lily, Michael or Mia though, thank goodness.

My only issue was that the title was ill fitting for what actually happened in the book. We don't even really get to see the wedding, which really annoyed me. We got to see the engagement and bits and pieces of the planning process, but most of the book was focused on the royal secret that Mia's father has been keeping from her and the rest of the family for years.


So not actually getting to see the wedding was the only reason that I am giving this book 4 stars. It was such a fun book, but I think it was weakened by the wedding ceremony not even appearing in the story.
Posted by Alexia Boesen at 8:00 AM