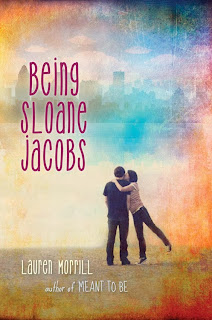 Synopsis from Goodreads:
Meet Sloane Emily Jacobs: a seriously stressed-out figure-skater from Washington, D.C., who choked during junior nationals and isn’t sure she’s ready for a comeback. What she does know is that she’d give anything to escape the mass of misery that is her life.Now meet Sloane Devon Jacobs, a spunky ice hockey player from Philly who’s been suspended from her team for too many aggressive hip checks. Her punishment? Hockey camp, now, when she’s playing the worst she’s ever played. If she messes up? Her life will be over.When the two Sloanes meet by chance in Montreal and decide to trade places for the summer, each girl thinks she’s the lucky one: no strangers to judge or laugh at Sloane Emily, no scouts expecting Sloane Devon to be a hero. But it didn’t occur to Sloane E. that while avoiding sequins and axels she might meet a hockey hottie—and Sloane D. never expected to run into a familiar (and very good-looking) face from home. It’s not long before the Sloanes discover that convincing people you’re someone else might be more difficult than being yourself.

Disclaimer: I received this e-ARC from NetGalley in exchange for my honest review.

Review:
This book title had been floating around my fellow book bloggers since shortly after I became a part of the book blogger community. I had seen the synopsis and I was truly excited for it although I knew my chances of getting an ARC of it were pretty slim. Imagine my surprise when I got the email from NetGalley a few months ago, in October.

I downloaded it instantly but wasn't able to get to it until recently.It was well worth the wait. It made me cry, laugh and have all the feels in between. This isn't a fluffy Parent Trap-esque book. The romance happens for the girls, not the parents.Happily, the romance wasn't the main plot point. It was a subplot to the main plot of two stressed out athletes needing a month away from their families.

Sloane Emily's family is a mess. She walked in on her father having an affair with his assistant, and suddenly that assistant is everywhere-even in Sloane Emily's thoughts. Her mother is clueless about the affair and Emily isn't about to clue her in on it. Her brother, James is working with the political party, who their father is NOT affiliated with.

Sloane Devon's family is a mess too. Her mother is a raging alcoholic, who is in rehab, her father is trying to parent her as a single father but is failing big time. Add that to Sloane Devon's temper and there's a recipe for disaster.

A lot of people are going to take issue with the fact that it seemed like they had no problems with switching and that they seemed to do well in sports that they weren't previously focused on.I don't find that as much of an issue mostly because they do have the background of being on the ice. They just have to get used to using different equipment. For Sloane Emily, that's pucks and hockey sticks and lots of body armor. For Sloane Devon, that's ice skates.

Nando and Matt were two good additions to the story. I did prefer Matt, mostly because I didn't feel it between Sloane Devon and Nando. I did feel major sparks between Matt and Sloane Emily though. They were completely adorable.Matt was so determined to prove that he was no longer a playboy like he had been in the past.

There always has to be some sort of rival in books like this but I was bored with Melody. I fully expected her to pull some crazy stuff like Ivy did.Yet, she didn't and that kind of bored me.Melody just seemed like the typical ultra-competitive player who talked a big talk but when it came right down to it, she was not going to risk her place at camp to go after Sloane Emily.

Alternating POV's was great and overall I preferred Sloane Devon's. There were many times that I busted out laughing so hard I was crying while reading her POV.

"And as much as the thought of Ivy finding a mouse in her bed thrills me, I really should just open the box and eat the brownies." Sloane Devon

She was everything that I could want in a likable character. She was laugh out loud funny, which was one of my favorite things about her.

"The only thing that's keeping me from smothering Ivy in her sleep is that I'm convinced that she would haunt me if I did." Sloane Devon

All in all, I really enjoyed this book, loved the characters a lot. I would love to give this book a full five stars but I didn't get many feels while reading this, which bummed me out. I also didn't feel like I got to see enough of Sloane Emily's personality. If I had gotten to see more of her personality, I think I would have liked her more.So this book will be getting 4 stars.

Lauren Elizabeth Morrill is many things, including, but not limited to, a writer, an educator, a badass roller derby skater, a former band nerd, an aggressive driver, and a die-hard Mac person. She also watches a lot of TV, eats a lot of junk food, and drinks a lot of Coke. It’s a wonder her brain and teeth haven’t rotted out of her head.