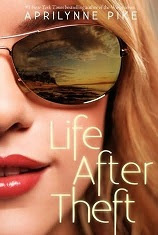 Synopsis: Kimberlee thought she was doomed to haunt her high school forever.She might have been right if she hadn't met Jeff. Unlike any other of her former classmates,Jeff can both see & hear Kimberlee. Now Kimberlee needs Jeff's help and Jeff is very reluctant to help her but the idea of her disappearing forever is very tempting to him.Things only get more complicated when Jeff agrees to help her.

Disclaimer: I won this in a book blog giveaway.

Review: I am extremely glad that I decided to read this book before reading the comments posted on various sites.I don't think I would have enjoyed it as much as I did,if I had read certain comments beforehand.

I actually really enjoyed this book.It was a quick read which I wasn't expecting.I got the book 22 hours ago and I'm already done.That's even with a decent night's sleep and reading other books in between.I am not surprised that this copy was a proof as there were several issues. Only one spelling error BUT there were several formatting issues that were driving me batty.

Oh well, on to the book. Like I said already,I enjoyed it. Having the book be in a guy's perspective was really awesome as most books have the female narrating the book.I loved that Jeff was a nerd.That was another deviation from typical fiction.

I'm absolutely obsessed with Khail. He was totally awesome and I really loved that there was more depth to him than we initially knew. I loved that he was a wrestler and that he wasn't a total meat-head like so many jocks in these YA book are.

Sera was totally confusing.Initially I really liked her a lot but by the end I wanted to hang her by her hair.She really didn't understand how to let go. I truly think that Jeff was only into her because she was in a word, hot. Yes she had substance but we didn't know the depth of the substance until much later in the book.

Kimberlee was totally messed up but I had the complete opposite feeling about her than I felt for Sera. By the end of the book,I just wanted Kimberlee to be at peace.She had struggled to have some semblance of peace while she was on Earth,so I wanted her to finally find it when she was able to completely be on the other side.

Obviously I am morally against stealing,however Kimberlee wanted to make amends for her actions.I couldn't vilify her for that.I wanted her to be able to make her amends to those whom she had stolen from.

I was pretty annoyed with Sera.Not only for her apparent inability to forgive Kimberlee,but also for her refusal to share things with Jeff. True intimacy in a relationship requires that both members of the couple be emotionally vulnerable and I just don't think Sera was there yet.

Ghosts have always fascinated me,so I knew the second I had read the synopsis,that I absolutely had to read this book.I think I would give this book 3.5 stars.I enjoyed it mostly because of the paranormal aspect of it. Kimberlee and Khail were my 2 favorite characters mostly because of their complexities. Sera was complex too but hers was more of the teenage rebellion complexity.Jeff was pretty uncomplicated which bored me a little bit.

In this case,me giving it 3.5 stars is not indicative to how much I actually enjoyed the book
Posted by Alexia Boesen at 8:00 AM