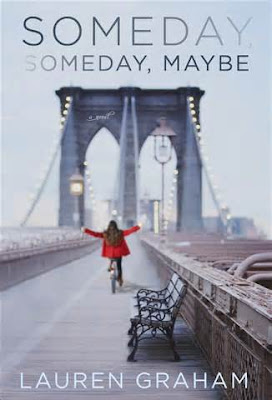 Frances "Franny" Banks is bound and determined to make it as an actress in the cutthroat business in New York. 2 1/2 years ago she set a deadline of three years. If she doesn't make it as an actress in those three years,then she will give up her dream. She now has six months until her deadline and she still hasn't made it. She has a fan club of Jane and Dan but even she knows that,that's not enough.

A pretty important showcase is coming up in her acting class and she cannot afford a mistake. Not if she wants to get into this business. Throw in a very attractive man by the name of James Franklin and you've got a disaster waiting to happen.

This book is about finding yourself even when you think you've lost sight of who you are. It's also about friendship and love.

I gotta be honest. When I found out that actress Lauren Graham had written a book, I was extremely hesitant to give it a try. I had watched her on Gilmore Girls and then on Parenthood and I had totally enjoyed her. However reading a book written by an actress was an entirely different ball of wax.

I needn't have worried. Someday, Someday, Maybe was a joy to read. I could feel Lauren Graham's persona really emerge in this book.It was definitely quirky,but a good quirky. Not the obnoxious quirky.

Franny Banks was awesome. I was rooting for her to succeed through the entire book. I wish we had seen just a bit of of Jane. Jane had her moments of comedic brilliance but I wish there had been more of it. Dan was SUCH a sweetheart and I knew almost immediately that he was interested in Franny despite him being engaged,James was definitely stereotyped as the cute guy who turns out to be an ass. That was a bit of a disappointment. I wanted him to be different and he wasn't.

Honestly I'd give this book 4 stars. The only reason it's not getting a full five stars is that I had an issue with the ending. The ending felt unfinished which I really didn't like.

If you've read this one,comment and let me know what you think.
Posted by Alexia Boesen at 6:36 PM