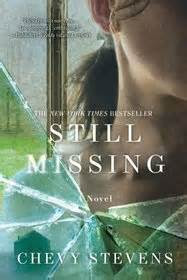 Synopsis: On the day that Annie O'Sullivan was abducted,she had three things to worry about: Resolve things with her mother,sell a house and be on time for dinner with her boyfriend.That all changes when she is abducted from a home that she is trying to sell.Still Missing interweaves Annie's year of hellish captivity into sessions with her psychologist.

In these sessions,Annie struggles to put her life back in order but she just can't let go of the lack of answers behind her abduction.Things come to a head with people in her inner circle that she never would have suspected.Does Annie have the strength to learn the truth about people she thought she knew?

Disclaimer: I won this book from a Goodreads giveaway.

Review: Well when I first read the description of this book I thought "Wow reminds me a LOT of Law & Order: Special Victims Unit" which I love. So when the book arrived in my mailbox,I eagerly began reading it. While the book itself reminded me a lot of what I imagine the victims' side of SVU would be like,it was even better than that. It was bone chilling and creepy. It was the kind of book that made me sleep with a bat next to my bed.

Certain parts of the book scared the living daylights out of me. I've been through a lot in my personal life and it's rare that something can actually scare me but Still Missing did just that. Yet I devoured the book.I finished nearly 3 quarters of the book that first night.I had recently read Chevy Stevens' newest book Always Watching (I received an ARC of it) and while that one was amazing in it's own right,the creepiness factor wasn't there as much as it was in Still Missing.

Annie was amazingly resilient. I tried to put myself in her shoes when she was being held captive by The Freak and I remember thinking that as strong as I think I am,I never would have made it a week much less a year with this man.

I could not really connect with Annie's relationship with her mother and I think that is based on my own life experience. My mother and I are extremely close.Best friend close.

The relationship with Luke seemed I don't know...One sided. I never thought I'd say this but I think The Freak had a point. I don't think Annie was ever really that into Luke. I think Luke was more into her than she was into him.

The relationship with Christina made me smile. Christina was there for Annie in a way that no one else really was. Yes Christina pushed her but I think her heart was in the right place when she pushed Annie.Christina's viewpoint on friendship was awesome.She viewed their friendship more important than her job.

The Freak was just that. A freak. It gave me the creeps to watch how he talked to Annie and made her actually feel pity for him when all she should have felt was anger at him.There were certain parts of the book where I actually had to put the book down and do something else.Those parts coincided with whenever The Freak was mentioned.These parts also included tears and/or throwing of the book across the room.

Overall this book was simply amazing.It was bone chilling and creepy in a way that really made you feel like you were in the story.Like her newest release I am giving Chevy Stevens' Still Missing 5 stars. This book,like Always Watching is not for everyone but for anyone who likes a great psychological thriller,you need to read this one.
Posted by Alexia Boesen at 4:40 PM