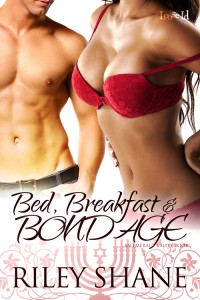 Synopsis: Anaya Bancroft has had her heart broken by Devlin Levi,yet her complete ineptitude in the kitchen of an inn that she co-owns forces her to ask her ex for hep in the kitchen.Just in the kitchen. That's it. However Devlin has other ideas.He wants 8 nights with her. 8 nights of fantasies.8 chances to prove that they can make this work.If at the end of it Anaya still believes that they can't make it work,then Devlin will never bother her again.

It's an arrangement that Anaya can't resist, even though she's afraid that Devlin just might break her heart all over again.

Review: Bed, Breakfast & Bondage was just the right amount of funny and sexy.Erotica is definitely not a genre of book that I read most often,but it's also not a genre that I shy away from. If it's done right,it can make one hot, sexy book. BB&B was definitely done right.It was clear to me from the start that both Devlin & Anaya were still in love. Anaya could try to deny it to her best friend all she wanted,but Leah and I both knew how she really felt about Devlin.

The sex scenes were done to perfection. I've never been able to write sex scenes, so to see them done so brilliantly and without giving body parts stupid names,gave me confidence that I could write sexy scenes just as well. I loved how one of the terms of the agreement was that there would be no judgement on the fantasies and if either of them were not interested in a certain fantasy or it was going in a direction that they were uncomfortable with,it would be stopped immediately. That showed a lot of class to me. Sometimes in these types of books,class is lacking.Then it feels just dirty and like raw animal sex.

I think I am going to give this book 4 stars. 4 only because I really wanted more and I felt like the book went too quickly.I thought I was going to say that I hated the ending but the more I think about it,the more I loved the ending.I need to go read more of Riley Shane's work now.
Posted by Alexia Boesen at 10:23 AM