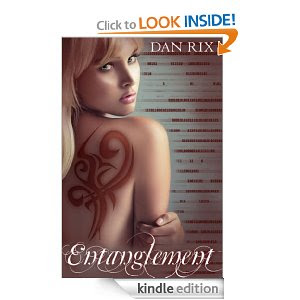 Hot-headed Aaron Harper is scheduled to meet his half in 29 days-on his 18th birthday.Except he doesn't buy this entanglement crap.He makes an unspoken vow to stick to brawling with the rugby team. Then a new girl arrives at school who changes everything.Amber Lillian is gorgeous yet cold and she can't seem to get away from the growing similarities between Aaron & herself. Except for one teeny detail,she is supposedly another man's half.As the story moves on,Amber & Aaron learn more about themselves and why they FEEL like halves. They just can't prove it. If they can't prove it by their 18th birthday,then Aaron is destined to live without a half and Amber must be with a man who plans to possess her in every way possible.

I wasn't sure how I would feel about this one. It looked too good and on occasion when books look too good they usually fail in the writing department. Not Entanglement. It was beautifully written throughout the book. Dan Rix used the type of descriptive language that is really lacking in a lot of books today. He made me feel like I was in the book and that really is the best feeling.

Amber & Aaron were likable & relatable which I loved. Despite Amber's coldness you felt empathy for her.Especially once you met Clive her supposed half.Not only that but Amber's family holds a few dark secrets of their own as well.Secrets that could change the course of Amber's life.Clive reminded me of some jerks I had gone to high school with so it was impossible to feel any sort of positive connection with him.

The other characters we met were hard for me to connect with. There were so many and the names so odd. Yet the one character outside of the two main ones, that I liked,was Emma Mist.Her half had died prematurely and that meant that her time was nearly up as well. Halves cannot live for very long without each other.

I really want to give this book a full five stars but I can't. Because of the underdevelopment of some of the supporting characters.So I'll give it 4.5 out of 5 stars. It was a great book and one that I will likely read again.
Posted by Alexia Boesen at 10:02 AM

Email ThisBlogThis!Share to TwitterShare to FacebookShare to Pinterest
Labels: Dystopian, YA