Review: Waiting for the Storm by Marie Landry 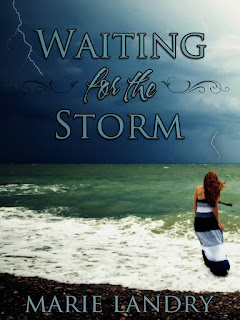 Synopsis: When Charlotte O'Dell loses her mother to illness,she is forced to begin the process of finding herself again.She had lost sight of who she was as she cared for her mother in her last months.Her sister is no help as she is inexplicably angry with Charlotte for reasons Charlotte can only speculate about.Her father is deep in his own grief,seemingly unable to pull himself out of it.The three of them are heading off to a beach house that was once Annie O'Dell's. It was her last wish that they go spend the summer there.

Once there,things don't seem to improve. Ella, or Gabriella,as she wants to be called now is hanging out all night with strangers. Their father seems to be sinking further and further into his grief and Charlotte is trying to take care of both of them even though there's no one to take care of her.

That is,until she meets Ezra.Ezra lives next door to the O'Dell's and he manages to worm his way into Charlotte's heart.He has is own demons though and when Charlotte discovers them for herself,it takes her awhile to forgive him for not telling her sooner.The summer at the beach house helps all three of the remaining O'Dell's in ways none of them expected.


Review: Have you ever read a book that stayed with you minutes and hours after you finish it? This book is of that caliber. I finished it several hours ago and yet it still sits with me. I think of certain parts of the book and I get emotional all over again.That's the mark of an amazing book.One that can give you so many feelings throughout it. One that can make you smile, laugh and yes, even cry.

Charlotte was a relatable character.It made sense to me that she had lost sight of who she was during the later part of her mother's illness.Ella's response made sense too.Grief comes in many forms. Some people soldier on,determined to take care of the family that are left.Some fall off the wagon so to speak and do things they wouldn't ordinarily do. And still others sink so far down in their grief that they struggle to see the light.All three O'Dell's could fit those three separate descriptions.

Ezra, Ezra, Ezra.There's not much I can say about this young man.Except I fell totally in love with him.I loved how there was a lot of depth to him. That's something that is usually lacking in books like this.What he did not only for his mother but also for the kids that lived on the island.He was flawed which is something that I look for in a book.No person is perfect. Everyone has flaws or have had crappy things happen to them in the past. No one's life is perfect.

It wasn't the aggravating love story that I have seen come from Young Adult books lately.It was gradual,which I loved.Ezra wasn't the type of guy to push Charlotte which made me adore him all the more.Charlotte needed him to be gradual and cautious as she worked to re-emerge back into the world.And Ezra happily obliged.I made the comment while reading,that Charlotte & Ezra were swoon-worthy and it's completely true.

This book was a perfect summer read and I just couldn't put it down for very long except when my eyes were closing in protest late at night.I am giving this book 5 stars.It has everything a person could want in a book.I really need to read more of Marie's books if all of her books are as amazing as this one.
Posted by Alexia Boesen at 5:39 PM