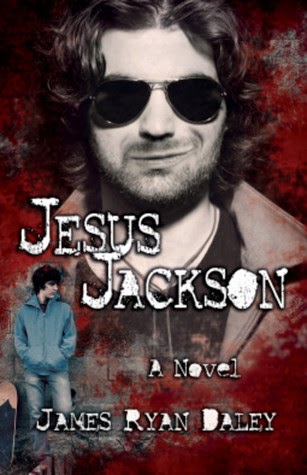 Jesus Jackson by James Ryan Daley
Genre: YA/Mystery
Published: 10/7/2014
Publisher: Poisoned Pencil
Book Link: Goodreads
Synopsis from Goodreads:
Jonathan Stiles is a 14 year-old atheist who is coping with his first day of ninth grade at the fervently religious St. Soren’s Academy when his idolized older brother Ryan is found dead at the bottom of a ravine behind the school. As his world crumbles, Jonathan meets an eccentric stranger who bears an uncanny resemblance to Jesus Christ (except for his white linen leisure suit and sparkling gold chains). Jesus Jackson, as he calls himself, offers to provide faith to Jonathan. He also suggests that Ryan s death may not have been an accident after all.

Jonathan teams up with Henry, his new best friend at St. Soren s, to investigate. The two boys find footprints leading to the ravine that match Ryan s sneakers. They are assisted by Ryan s grieving girlfriend, Tristan, who also thinks the accident theory is bunk. The police, however, will not listen. But Jonathan knows something the police do not know: Shortly before his death, Ryan was doing cocaine with fellow footballer and number one suspect Alistair not far from the ravine where his body was found. An inspired Jonathan battles sanctimonious school psychologists, overzealous administrators, and a cavalry of Christian classmates on his quest to discover the truth about Ryan’s death and about god, high school, and the meaning of life, while he’s at it. But he keeps getting distracted by Cassie Alistair s quirky younger sister who holds the keys to the answers Jonathan is searching for, but who also makes him wonder if he should be searching for them at all.”
Excerpt:
When I first saw Jesus, he was standing like a statue on the fifty-yard line of the high school football field, one arm pointed at the goalpost and the other cocked back—fingers curled around an imaginary pigskin, locked at the ready for a pantomimed hail-Mary in the final seconds of a make believe bowl game. It was a glorious moment to behold...at least, that is, until an invisible opponent rushed his offensive line. Jesus had to fake right, spin left, and duck around a pretend tight end to make a harrowing dash for the touchdown. He hit a few straight-arm blocks, pulled some fancy footwork, and half a second later he was jogging across the goal line, spiking the ball, and moonwalking clear from one side of the end zone to the other.
Now I know what you’re thinking, but stop right there. And trust me: This guy was totally Jesus. The long, straw-brown hair, straggly beard, gaunt frame, and clear-bright eyes; he was a dead ringer for the son of God. The only difference, as far as I could tell, between the Jesus on the football field and the one hanging on the cross in the school auditorium, was his clothes. The latter wore nearly none, of course, while this one was done up all dapper in a white linen suit, patent leather loafers, and a wide-collared, pastel pink button-down disco shirt, opened just enough to reveal a tuft of flaxen hair and a sparkling gold chain.
But before I get too far into this story, I need to stop and explain a couple things to you. First, you need to know that this little run-in with the savior was happening on a cold and dewy Saturday morning, at about nine am. It was the first of September—about fifteen weeks after my fourteenth birthday, roughly three months since my last day of junior high, and exactly two hours after my big brother’s body was found, life- less and broken, at the bottom of a sixty-foot ravine behind St. Soren’s. I don’t want to dwell on this detail too much at the moment (we’ll get into it all later, trust me), but I just thought you ought to know. For perspective.
Oh yeah, and another thing: I don’t actually believe in Jesus. Didn’t then, don’t now. Not even a little.
So anyway, I watched the old king-of-kings run a victory lap around the track—arms raised, hair streaming behind him in the wind—but just as I was about to wander off, he stopped again on the fifty-yard line, waved his left hand high over his head, and called out, “Hey, you!”
I looked behind me to see if he was referring to someone else, but no one was there. We met eyes and I pointed to my chest with a shrug.
“Yeah, you,” he yelled. “Come on down here, would ya?”
I didn’t have anything else to do at the moment (the cops and paramedics wouldn’t let me near the ravine), and to tell you the truth, I was happy for the distraction. So I put my hands  in my pockets and strolled all the way down the aisle, through the bleachers, and onto the field.

Jesus just stood there, grinning at me more like a salesman than a savior, waiting for me to reach him. And as soon as I stepped onto the grass, he hopped back and began bouncing on his toes, his hands cradling another imaginary football.
“All right,” he said, staring down the field. “Go long.” “Excuse me?” “Go long.” “Why?”
He started bobbing, weaving, dodging pretend defensemen. “It’s the fourth quarter; we’ve got twelve seconds and we’re down by five. Now go long.”
“But you don’t have a real ball.”
He shook his head, unimpressed with my logic. “And you aren’t a real wide receiver and this isn’t the real Super Bowl, and I’m not about to get sacked by a real defensive lineman named the Arkansas Annihilator. Don’t be so concerned with reality all the time. Just go long!”
I realized that I was not about to beat this guy in an argu- ment. And seeing as how my current options were to go long with Jesus or go back to the crowd of cops and detectives and school administrators and weeping parents and one very dead older brother in a ravine behind the school, I decided on the former.
“Fine.” I said. “Fine.” And I ran.
I didn’t run very fast, but it felt good to put my body into action, to pump some blood back through all the numbness. I’d been so still and so frozen since the morning, when I first found my mother in the kitchen surrounded by pancakes and bacon and fruit salad and coffee and pastries and juice (she liked to cook when she was upset), and learned that Ryan had apparently fallen while taking a jog after football practice the previous afternoon. But right then, on that field, I could feel my body begin to warm, the sensation returning (just a little) to my limbs.
The funny thing is, Jesus must have been hiding a real ball somewhere (though I can’t imagine where) because when I finally made it down around the ten-yard line and turned to make the imaginary catch, I got smacked clear off my feet by a solid, real, and perfectly spiraling football.
The pass hit me right beneath the rib cage, knocking the wind out of me. I fell hard and gasped for air. My eyes shut while I struggled to catch my breath and when I finally opened them, there was Jesus, standing straight over me, reaching a hand down to help me up.
“Sorry about that,” he said, hoisting me to my feet. “I was just trying to make a point.”

I rubbed my chest and winced. “I get it. You’ve got one hell of an arm. You could go pro.”
“That wasn’t exactly my point.” He extended his right hand. “I’m Jesus.”
I shook it. “I figured. It’s a good look for you. You really pull it off.”
Jesus tugged at his lapel. “Well, thank you.”
“Aren’t you supposed to wear, like...robes, though? And sandals? And, you know, do things more holy then mess around on a football field?”
“No,” he chuckled, pulling a business card from his pocket. “You’ve got me mixed up. I’m not that Jesus. I’m Jesus Jackson.”
He handed me the card. I looked it over. It read:
Jesus Jackson: Spiritual Contractor 100% faith guaranteed! Call for a FREE ESTIMATE! 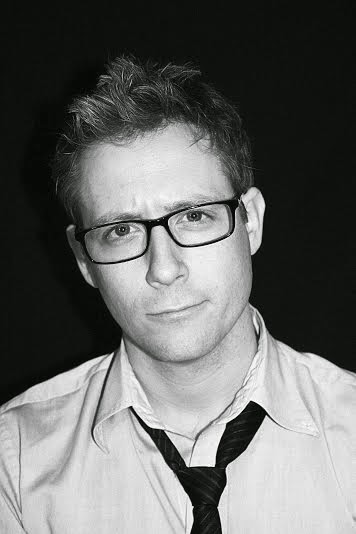 Hi. I’m James. I’m a writer, editor, and designer of various paper-based and digital things. Since finishing my MFA at the Vermont College of Fine Arts in 2004, I’ve been spending most of my time teaching writing to college students, creating websites about video games, and writing mystery novels about pensive young ne’erdowells. When I’m not obsessively poring over pixels and pronouns, I can usually be found arguing with strangers on the Internet or seeking out adventure with my indomitable wife and two indefatigable daughters.
Connect with the Author:
Goodreads
Website
Twitter
Posted by Alexia Boesen at 6:00 AM