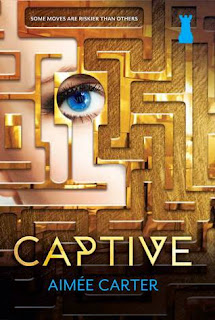 
Synopsis from Goodreads:
For the past two months, Kitty Doe's life has been a lie. Forced to impersonate the Prime Minister's niece, her frustration grows as her trust in her fake fiancé cracks, her real boyfriend is forbidden and the Blackcoats keep her in the dark more than ever. But in the midst of discovering that her role in the Hart family may not be as coincidental as she thought, she's accused of treason and is forced to face her greatest fear: Elsewhere. A prison where no one can escape. As one shocking revelation leads to the next, Kitty learns the hard way that she can trust no one, not even the people she thought were on her side. With her back against the wall, Kitty wants to believe she'll do whatever it takes to support the rebellion she believes in—but is she prepared to pay the ultimate price?

Disclaimer: I received this e-ARC from Harlequin Teen via NetGalley in change for my honest review.

I had a lot of concerns about Captive, mostly surrounding the infamous "Second book syndrome" I had enjoyed Pawn so much that I was honestly afraid to read Captive. I really didn't want to be disappointed. Thankfully, not only was I not disappointed but Captive surpassed my expectations in a really big way.

Kitty is still fiercely loyal to her Benjy, the boy she loves, everything she does, she does with him in mind. I still liked them together as a couple, but this book didn't focus as much on the romance as Pawn had, which actually made the book better, I think. It focused on the relationships and friendships rather than the romances.

There were so many surprises that left me screaming "Holy shit" at the top of my lungs. So many twists that I didn't see coming. A few times I was confused, but confused in the best way. I love when books keep me guessing like this one did. It adds an element to it that not very many books have.

There are so many new characters in this book, but they are woven in nicely, and they didn't add to my confusion. Several of them are really, really important to the story as well. So keep your eye on these characters, as you never know when or even if they'll be important.

The world building was even better this time around. It was good in Pawn, but it was really good in Captive, so kudos to Carter for taking time to build the world that Kitty and everyone else lives in. A well developed world can really help a book be awesome, and in this case it definitely helped.

I hate that I'm being so vague about stuff, but I really don't want to spoil it for anyone. This entire book is filled with spoilers so I really can't say much else about the book. What I can say though, is that I loved it and cannot wait for book 3, the final book in the trilogy. I can also let you know that this book was utterly fantastic and I'll be giving it 5 stars. Go read it now.
Posted by Alexia Boesen at 8:00 AM